A private view at Penair and a world premiere

A Private View of I Packed This Myself at Penair School, Truro. Some nervousness beforehand. How many people would come? But sumptuous food. Lots of people. Students who greeted guests and gave informed and engaging guided tours of the exhibition. A tremendous atmosphere even before a bus arrived from Leedstown with workers from Southern England Farms (SEF) who had made a film of their lives, The Hidden Life of a Cornish Farm.
Quite an emotional moment - it seemed such a breakthrough that they were able to come and see the first screening of the film.  Inga Riaukaité, Andrius Riauka, Domantus Plusciauskis and Valius Icontrimas pose here by photos by Tom Pilston of migrant workers in west Cornwall. 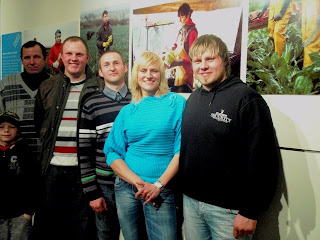 And viewing the photos... 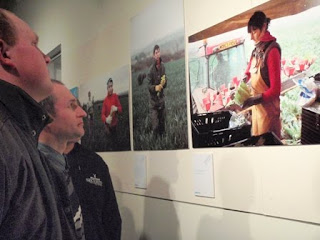 An old friend - Ross Tibbles of University College Falmouth with work created for I Packed This Myself when it opened in Camborne, March 2009. 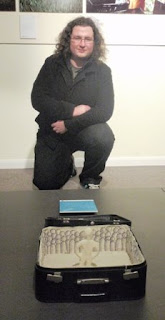 And work created by students at Penair, using the flat pack suitcases we have created to go alongside the exhibition. 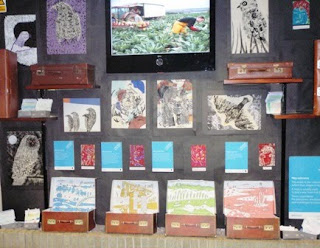 This only happened due to the work of a large number of people - too many to mention, as always, but Carmel Henry and Tanya Davies at Penair really took the project to heart. As did Ruth Morecock, Head of Art and Joan Smith, ESOL teacher at Southern England Farms, Leedstown. The film could not have been made without the backing of SEF and Jane Richards.  And of course nothing at all would have been possible without funding for all the materials and workshops from the Migration Impacts Fund.